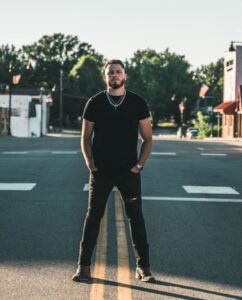 Anderson Daniels is on a straight-line to creating the Midwestern sound in Country Music. Born in America’s Heartland, the 25-year-old Minnesota native takes pride in the blended sound that pulls from his roots. In 2018, Daniels released his first EP titled “Heartland” which debuted inside the top 20 on the iTunes Country Charts.
After taking home the New Artist of the Year Award at the annual Midwest Country Music Association Award Show in 2019, followed by a nomination for Male Vocalist of the Year in 2020, Anderson has toured extensively throughout the nation opening for some of country music’s legends and rising stars.
Upon entering 2020, Anderson Daniels wrapped up his first headlining tour throughout the country, followed by turning his focus back to the studio in Nashville, TN, to follow up the success of his first release. His brand new single “Town Like This” (released in July of this year) is already nearing 100,000 total streams and is to be followed up with more new music to finish out the year.
Continuing to grow an audience coast to coast, AD connects with country music fans of all kinds through social media and an electrifying live show. Make it a point to see this show next time he rolls through your town, but until then you can get to know Anderson through his songs, currently available wherever you stream your music.

Don’t miss him this year at the 2021 High Lifter ERX Offroad Rally!

Get your ticket now for four nights of live music and five days of action-packed events! Buy Tickets Here